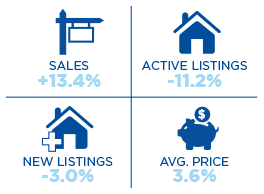 TREB reported 7,711 sales for August. We would describe this number as a return to more ‘normalized’ sales levels. See our Table below for August sales over the past seven years. While sales were lower than July, this is in-line with seasonal sales figures. We would also expect that September sales would be slightly lower again, before an uptick in October. Both ‘new’ and ‘active’ listings in August were lower in 2019 than they were a year ago. This trend confirms that prices are continuing to rise. In fact, a ‘sales-to-new listing’ ratio of 65% is ample proof that we have returned to a ‘sellers’ market’.
Looking at the condo market, there is no doubt that this market segment outperformed the overall market in the last twelve months. However, both sales and price increases are starting to slow. For August, condo sales were 3% higher than for the same month a year ago. On a year-to-date basis, overall condo sales were only 1% higher than for 2018.
A similar story is unfolding in the Downtown and Humber Bay Shores condo markets, where sales in August were unchanged from August of 2018. As we keep saying, one needs to look at listing activity to get a direction on prices. New condo listings Downtown in August were down 8% from August of 2018. For Humber Bay Shores, they were unchanged. Sales-to-new listings for these markets are at 66% - still a sellers’ market, an indication that prices will continue to increase. On a year-over-year basis, condo prices are up by 8% - remember in January the year-over-year increase was running at 10% - so there is some slowing in price increases.
Real estate ‘price bubbles’ occur when demand (buyers) outstrips supply. These bubbles burst when supply catches up and exceeds demand. In Toronto we don’t see this happening any time soon. Population growth is increasing, not slowing, and Governments are taking little action to encourage an increase in supply (new housing). Recently a builder released 450 new pre-construction condos in central Toronto. There were 3,000 worksheets to purchase, submitted from agents representing buyers for product that will not arrive on the market for four years!

Sales in 2016 for the year were a record 113,040. We would describe 2019 as returning to 'normalized' levels.
Source: Toronto Real Estate Board
listing-data